“Well hell-owwwwwwwe!” is the boom-box voice introduction you can expect to hear from the larger than life, Bernard ‘Pretty’ Purdie; should you ever be in his live presence. Here is yet another drummer whose unique playing and personality escaped my limited radar for far too long. 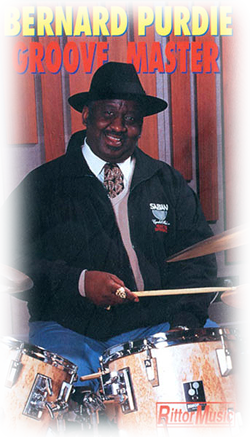 Although by the early 1990’s I’d seen snippets of both the Jeff Porcaro and Bernard Purdie instructional VHS videos, the aroma of wake-up call coffee didn’t hit me until the latter part of that decade. Maybe it was my final conversion to full-on Bonham awareness that made me re-explore the videos for answers to the ‘Fool In The Rain’ groove; or maybe it was listening to Steely Dan’s ‘Alive In America’ album that prodded me to search for the original ‘Babylon Sisters’ studio take. Whatever the medium, it’s never too late for any drummer to discover Bernard Purdie. Whether it’s the raw-nasty fill before “and now we need a pound of fat-back drums!” from King Curtis’ ‘Memphis Soul Stew’ or the warm, treacle-laced groove on Aretha’s ‘Rock Steady’ that draws you into Purdie’s world; once he’s nailed your white-boy ears back, there’s no escaping his feel-good factor playing. If ever there was a man who could channel his persona into an instrument and permeate a whole room with infectious positive vibes, Bernard Purdie surely tops the list of such practitioners.

Possibly one of the most revelatory 70 minutes of the latter part of my 20th century, was sitting down to watch his ‘Groove Master’ video in its entirety. Compared to the gross, tasteless, technique-driven drum instructional video releases that have plagued the tuition market since the late 1980’s, this simplistic work of beauty remains a beacon of light in a continuum of darkness. It proved to be a lifeline from a world dominated by drum-slingers, a personal passport back to into a country named Reality, where drums are played to make people feel good, as opposed to confusing them.

Whether or not Purdie does hold legitimate claim to the title of ‘World’s most recorded drummer’, or as the controversial hired hand to redo drum parts on pre-Ringo Beatles recordings, there can be no question over his expressive uniqueness when he channels his soul through the medium of music.

A friend told me a story about a sound-engineer he knew who once had the pleasure or recording Purdie on a session. Having asked him to line check the kit for levels just the once, a request was made to focus on a particular drum and tweak its sound further, to which, Purdie retorted, in the nicest possible way:

That’s Bernard Purdie for you; no-nonsense, one-of-a-kind, joyful drumming made to make the human race feel good and bring the gift of wisdom to foolish drummers; better late than never.