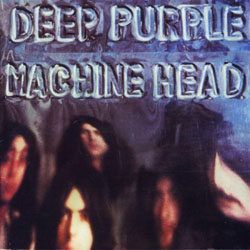 Amongst the cool vinyl in my Mum’s record collection lay at least two Deep Purple albums. By 1981 I had glued myself to a worn copy of the landmark ‘Machine Head’, featuring the classic rhythm section line-up of Ian Paice and Roger Glover. Soon I was to discover their ‘Made In Japan’ live album, debuting a fiery drum solo from a 24 year old self-taught Paice upon my juvenile ears. Being new to the world of the drum solo, this (quite rightly so) blew my impressionable teenage mind. At that point in my life, I was completely unaware of the similar musical backgrounds both Ian Paice and John Bonham shared, both born in the same year and both absorbing the influences of early American Rock’n’Roll and Big Band Jazz. Although familiar with some of Zeppelin’s studio work, it was Ian Paice I would gravitate to for early Rock drumming inspiration. Being the way of the teenager, it wouldn’t be long before I moved onto another drum hero; but for quite a few months, Ian Paice and his ‘Mule’ solo ruled my world. 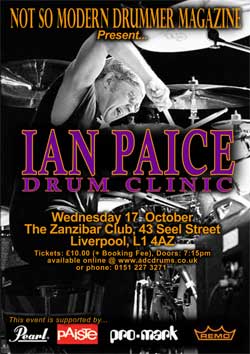 Fast forward to 2007 and as part of my day-job, I was asked to produce the promotional material for a rare Ian Paice drum clinic taking place locally, all made possible by Bill Ludwig III. A perk of the job was that I got to spend some dressing room time with Paice, hopefully managing not to gabble like an idiot meeting one of his childhood heroes. During conversation, I managed to approach the subject of ‘The Mule’ and conveyed what a huge influence it was on me in my youth. “it wasn’t bad for its time” he retorted, “I’ve done better since!” and with that, I succeeded in getting my Mum’s truly dog-eared ‘Machine Head’ album cover signed. It was one of those moments that all those years ago, I would never in a million years believed could happen. But sometimes these things are destined to be and as legendary Rock stars go, Paice must be a pretty grounded individual to gracefully chew the fat with the likes of me.