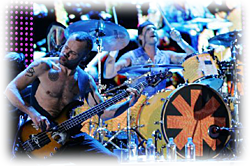 A knock-on effect of getting into Living Colour during the early 90’s was my rediscovery of the Red Hot Chili Peppers and of course, their most excellent groove-master, Chad Smith. I say rediscovery, because around 1989, an ex-band colleague had already introduced me to their freshly released ‘Mother’s Milk’ album. In my typically musically retarded response, I generated some lukewarm enthusiasm for the record in my friends direction, attempting to hide a ‘not that impressed’ reaction. This was in stark contrast to my1992 awakening when the band started to make a rather large ‘blip’ on my funk-radar screen.

Notably, it was ‘Blood Sugar Sex Magik’ that secured my interest in the band, eventually reconnecting me with ‘Mother’s Milk’. The heavily funk-infused theme of the former album was what really lit a fire in my drumming imagination, thanks to some of the most ground-breaking, ass-kicking grooves ever laid down by a white rhythm section. 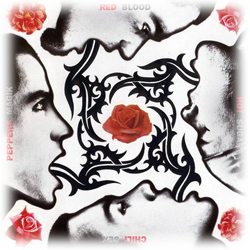 No matter what musical ideas the Chili Peppers threw at their relatively new member, it seemed impossible for Chad Smith to do anything other than mash in some feel-good funkified beats with Bass-brother Flea. To my fresh ears, this was yet another source of inspiration to take me away from a recent barren musical existence. Such was the skill and cheekiness of Smith’s footwork, there were times I could have sworn he was employing double-bass drum trickery, but not so; Chad executed everything – like one of his major heroes, John Bonham – with one foot. This was something I should have taken more heed of at the time, but regretfully chose to skip in favour of diversionary studies with two feet. Never the less, Chad’s overall attitude for being a slave to the groove definitely tattooed itself under my skin, adding yet another layer to the foundation of ideas inspired by Will Calhoun. 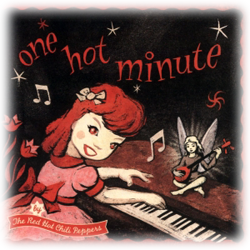 Having missed their previous UK visit, I finally got to see the Chili Peppers live on their 1995 ‘One Hot Minute’ tour at the Manchester Apollo theatre. This was to be the last time the band would play this size of venue as the following years would see them promoted to stadium status. Having read Anthony Kiedis’ autobiography, ‘Scar Tissue’, a compelling account of a lifetime of Class-A drug abuse, it’s hard believe how the Chili Peppers stayed together and even more surprising to read how Kiedis has cheated death. It would seem that throughout the bands turbulent career, Smith has somehow held in there with the belief that the unit would eventually make it through. Personally, I don’t think I could have stuck out a situation where the conditions of work were determined by the variable sobriety of one person, so the guy must have a heart as big as his groove-bag. Although it’s unlikely that we’ll see another Chili Peppers album to beat the halcyon days of ‘Blood Sugar Sex Magik’, as long as Chad Smith, Flea, Anthony Kiedis and A-Nother feel the urge to make music together, I’ll always be ready to listen to what a new chapter can bring.